Skip to content
By supergillesAugust 20, 2010UncategorizedLeave a Comment on Soon as Jay-Z thought he cleared the air… 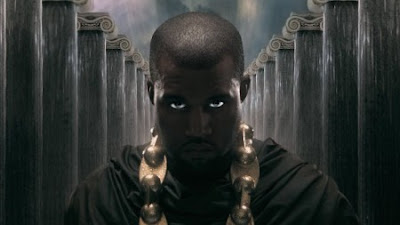 The video starts off with a close-up of Kanye West with glow-in-the-dark eyes, as if he was “illuminated” from within. He stands between an infinite row of Ionic columns, which represent “wisdom” in Masonic symbolism. 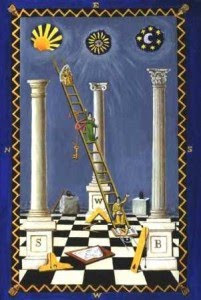 Two pillars leading to Jacob’s Ladder in this Masonic tracing board.

The next thing that catches the viewer’s eye is most probably that gigantic chain with Horus’ head as a pendant. Horus is an ancient Egyptian deity that has an extreme importance in occult mysteries. Considered to be the Sky god, he is more often represented with the symbol of a single eye. The Eye of Horus is an ancient Egyptian symbol of protection and royal power from deities, in this case from Horus or Ra. 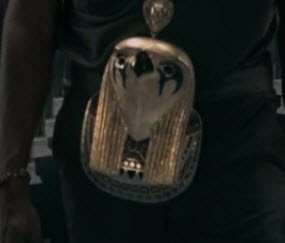 The entrance of the gateway of pillars is guarded by two horned albino girls holding a staff. Their features are very reminiscent of depictions Isis and Hathor goddesses of ancient Egypt, another allusion to Egyptian magic. 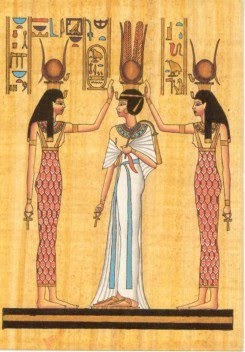 Isis was the mother of Horus (discussed above) and was the goddess of motherhood, nature and magic. Hathor was also considered as a maternal deity, and also being the goddess of music, dance and fertility. Both Isis and Hathor were known to welcome and protect the dead during their journey to the afterlife.

THAT n*gga got a SWORD. 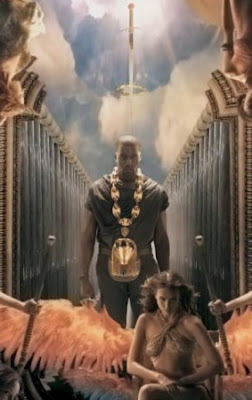 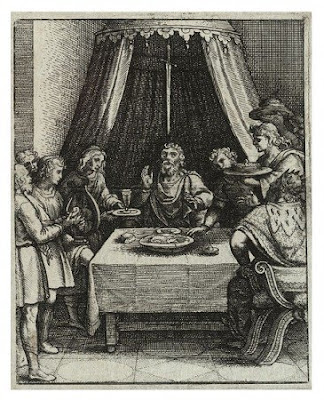 Wenceslas Hollar’s depiction of the Sword of Damocles.

Shouts to David Mathemuhf*ckin’ matics‘ G chat status for the assist. “Yeezy, you got some ‘splainin’ to do…” Now, folks definitely gon’ think something’s up. Hahahahahahahahahahahahaha…*Secret-society shrug*